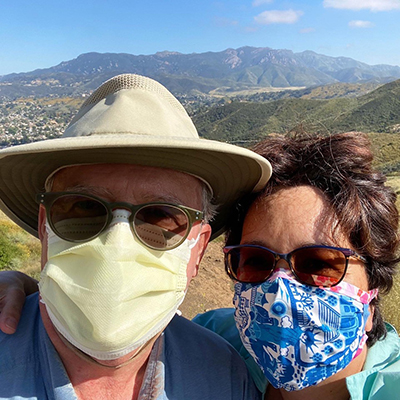 It's hard to answer the question, "How are you doing?" when I know someone is really asking, "How are you handling this pandemic?" I recall the movie In Good Company, the scene where the romantic lead asks the father figure how he pulls off the perfect marriage. The older guy, played by Dennis Quaid, replies: "You just pick the right one to be in the foxhole with..."

That's where I get my answer: "I picked the right one to be in the foxhole with."

My husband, Dale, walks to work, one-and-a-half miles away. Long ago, I asked him to exercise more as part of our commitment to each other. Now he seems to like it. Fourth of July weekend, I asked him to let me drive him to work. At first he balked, until I said it would give me peace of mind. That convinced him.

I was concerned that people who wear masks, as we do, to help prevent the spread of COVID-19 might be less likely to be out and about, so he'd be outnumbered by those who get angry at us for wearing them. I worried someone might confront Dale. COVID-19 is a constant reminder that whatever happens to him, happens to me.

Recently, we were riding bikes along our beach's promenade, when a mask-less man who was cycling toward us steered into my lane. No one was blocking his lane, yet he sped straight at me, playing chicken. He glared at me with such malice it took my breath away.

I'll admit it hurt my feelings—because he looked Latino like me.

I wanted to shout, "We have to stick together!" Or at least, "Pendejo!" so he might guess I'm Mexican.

I'm multi-race actually, my features ethnically ambiguous. I've been hearing about this my whole life. Some white folks don't care, some ask, "What are you?" some say things like, "But you're not like other Mexicans." Sometimes fellow Latinos seem suspicious, of me and my bad Spanish. My Mexican-Chinese grandma, who raised me, once cracked a joke and when I didn't get it, said, "See? You don't really know Spanish!"

These days I'm a caregiver for my white birthmother who couldn't raise me, and for my Korean-American grandpa who raised me though we share no DNA. I don't look like anyone in my family, and sometimes want to defend my credentials to belong. I'm the melting pot personified. Sometimes I'm dismayed when the cultural group I identify with most, Latinos, don't identify with me.

But I said nothing. If I shouted, "Pendejo!" I feared the mask-less biker might feel attacked by racists. My husband's white, and when I'm with him, my face hidden by my mask, I guess we're the "white couple," though I've never felt fully white in my life. Worse, I feared this guy might stop to yell at us. A friend was recently at her job and asked a customer to put on her mask, and the woman threw it at her. I didn't want to learn the hard way whether this guy saw our masks as part of a conspiracy to control the masses. I pictured him shouting, spit flying.

It was over in seconds. The unmasked man maintained his collision course until I swerved to avoid crashing into either him or the ditch. He smirked at my dismay.

"What an asshole!" Dale said.

"It's because you're wearing a mask," he said.

In my head, I keep having conversations with the mask-less rider. In my head, I tell him I have occasional asthma and an undersize trachea, that my husband's over 60, that my mother and grandpa are in assisted living—that my family is high-risk for COVID-19, yet we still need sun and exercise. In our imaginary conversation, I explain I didn't wear a mask to hurt him, or to pressure him to wear one (though I'd rather he did), but in hopes it would prevent any germs I might carry from making my neighbors sick—including him.

My husband tells me, "You're a good person."

I feel like this exchange reminds us to do our best.

So he lets me drive him to work this once, to take care of him so he can take care of me. I work at home. Later I pick him up, he makes dinner, with food I bought at my now-weekly grocery trek, and we watch the finale of Dark, a Netflix show about a dysfunctional time-traveling family who triggers the apocalypse. Our foxhole is quieter than my usual adventurous life. I like the peace.

My favorite moments are spent curled up with Dale on our couch. I think of friends who don't have this gift, and give him an extra hug.

Because whatever happens to me happens to him, I don't currently attend protests though I support many of them. Instead, I go online to amplify the voices of Black Lives Matter, of those fighting for social justice or against the spread of COVID-19. I see them all as fights to keep humanity alive. I share stories, in hope of increasing the mutual understanding that might lead to a more compassionate world.

I've never been clearer that my husband makes my humble quest possible. Without him I'd be alone on my path, or in my foxhole.

He replies, "Be safe," and walks away.

It's the hardest part of my day.


Wishing you all safety, love, and good stories!
Cara

If these chaotic times have you down...if you believe masks help prevent COVID-19, Black Lives Matter, or climate action is important to humanity's future...if you can spare either a dime or your time, here are three organizations worth considering: