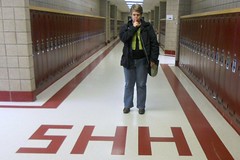 I was listening to a lot of silence during a discussion in my high school writing workshop today, when I realized two things: 1) I’m usually comfortable with silence, and when I’m the only instructor in a room I’ll usually let it go, but 2) when I’m a visiting instructor in another teacher’s room, I sometimes worry she’ll take silence as lack of engagement. So I’ll wait until it seems the silence has gone on for what feels like a long time, and then I’ll fill it.

Sometimes the other teacher will jump in even before I do. So, maybe it’s true. Maybe some teachers are uncomfortable with silence, or maybe they feel that we can cover more material if we wait less, or maybe they just know their students better than I do and recognize when the kids need more prompting.

Today, I was delighted when I asked the teacher for feedback and she said, “It’s okay sometimes to just let it be silent.” Yes, I agree, and not just when it comes to asking students questions, or being anywhere near a school. I was relieved to hear her ask me to embrace the silence, though a little embarrassed at having been caught trying too hard to fill it. I’m excited to return next time with a renewed commitment to give people’s learning brains time to quietly process before participating.

I didn’t start my path to embracing silence until my mid-30s, and it’s an ongoing journey. After spending high school and college doing plenty of acting, singing, and dancing, and spending college and my early career doing plenty of TV and radio, I was well-trained in how to avoid awkward pauses onstage, and dead air on-camera or on-mic. For a talkative person like me, this was an invitation to extremes. For years, even when I was socializing I felt responsible for filling every lag in conversation, even when I was among several people.

Today, I sometimes luxuriate in the lull, looking around me at the faces and thinking with gratitude, “I’m not the only one in on this.” Thank God. Sometimes I even walk to a corner of a party and just sit watching everybody, without panicking that it’s not sociable to sit all by myself. It’s never long before somebody, looking for an easy opening, will walk my way.

Embracing silence, and even solitude, is a major switch from the panicked social butterfly I was in my twenties and thirties. I believe it has something to do with a girl who humiliated me on my first day in sixth grade, by throwing the contents of my purse from person to person in gym class. It seems I spent years trying to get that purse back and assert control of my image. Today I know that in that sort of situation I’m not the problem. To laugh or yell or let it go in silence: the choice is mine.

I’ll admit, it may always be difficult for me to tell how much silence is enough, because I have a racing brain. I’ve heard and seen enough media recordings of myself to know that time really does feel different to me than to many people. Still, it’s an excellent practice in being fully present: allowing myself to use my synaptic storms to take in every detail of the moment, to feel the presence of each student, to embrace the energy in the room for better or worse, and to open myself to all the possibilities of what might happen next—without trying to force it to happen.

When you’re leading a group, do you ever find yourself wondering how to respond to silence?