GETTING KICKED BY ROUTE 66: Part Three – Jazzing it up Chicago Style

“…the only people for me are the mad ones, the ones who are mad to live, mad to talk, mad to be saved, desirous of everything at the same time, the ones that never yawn or say a commonplace thing, but burn, burn, burn…” Jack Kerouac. 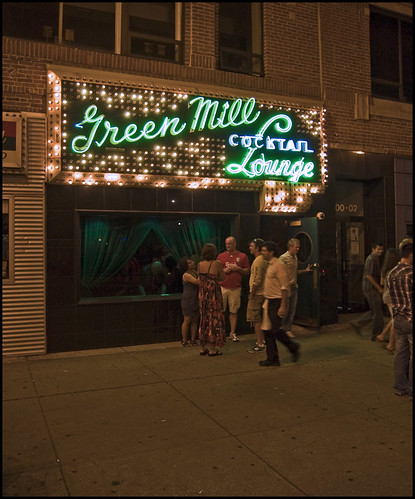 We grab a cab to take us to the oldest continuously operating jazz club in Chicago, an old speakeasy called the Green Mill. (photo by Tom Gill)

My girlfriend Stephanie and I came to Chicago because we plan to drive Route 66, and it would seem wrong to hit that storied road without slipping into Chicago’s notorious past. That means jazz. If you’re going to jazz it up right, late night’s the ticket. It’s almost 10:00 when we grab a cab to take us to the oldest continuously operating jazz club in Chicago, an old speakeasy called the Green Mill.

Al Capone used to hang out there, and even though we never would have admired a mob boss in real life, now that he’s dead, infamy gives him the glow of immortality. And like any women trying to recapture the recklessness of youth on a girls’ night out, we want to go where the bad boys go — or at least, where they went.

Our cab driver is the talkative sort, a 50- to 60-something African-American gent full of colorful personal stories that we never asked for. He claims that, during his younger days as a sailor in Okinawa, he supplemented his meager income by becoming a loan shark. He says it all started with the reel-to-reel tape recorder he bought to throw his version of karaoke parties, back in the 60s.

“So, you invented karaoke!” I interrupt, laughing.

He doesn’t demur. Somewhere along the way, he sold his karaoke machine/tape recorder to someone who needed 50 bucks. “I sold it to them for 70 bucks, loaned them 50, and made 20. And that’s how I became a loan shark.”

What a perfect cabbie to take us to an old gangster hangout. I’m almost sorry to arrive. Almost.

The club is just what I’ve been picturing in my 1930s James Cagney movie fantasies. It’s low slung and sexy as a gun moll’s dress: curving art deco, dim lighting, low booths, and a long wood bar, all glowing beneath shapely chandeliers. Although the patrons wear modern clothes and one cocktail waitress sports a major tattoo, the subtle murmur and sudden laughter in the room feels like it was bottled some eight decades ago. The only thing missing is the cigarette smoke, because Chicago has gone smoke-free. This makes it less evocative, but much more tolerable to linger through two sets of jazz. 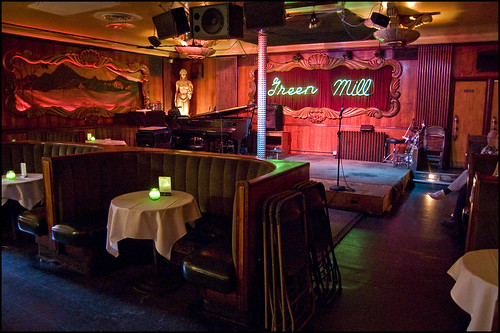 The club is just what I’ve been picturing in my James Cagney movie fantasies. Tradition says this was Al Capone’s favorite booth. (photo by Tom Gill)

The band is the Alexander and Rotundi Quintet, featuring Eric Alexander on sax and Jim Rotundi on trumpet.

Steph points out that the sax player also happens to be young and tasty. But she deflates the moment by telling me how old and tired she feels, when it’s only 10:00 and we’re supposed to be just getting started. I admit I’m tired, too, probably because I’ve reached my usual two-drink limit.

“It’s not that I’m old,” I say. “It’s that I’m married and not used to staying out late anymore, because I’m usually hanging out with my husband in front of the TV at night.”

I hate when she does that. I’m not old, and I don’t have to face anything I don’t want to.

I hope you don’t lose respect for my taste, or my patriotism, when I tell you that I typically don’t go for improvisational jazz — is there any other kind? I love swing and blues, but pure jazz forces me to concentrate too hard, is difficult to connect with, and impossible to dance to. Even on this night, in the throws of Route ’66 nostalgia, a few songs almost lose me, as I float away in an uncomprehending trance. Then again, maybe that’s the idea.

Whatever is happening to my dissociated body, I do appreciate the quality of the music. These guys are so good that a few songs take me beyond mere appreciation. I return to my body on the strains of a hot-blooded tune, as the players riff out a flawless shuffle of notes up and down the range of possibility. In spite of myself, I’m having a good time.

I keep turning to look at the door. I don’t know why. Maybe Steph was right. Maybe I’m getting old, yearning to beat a retreat though it’s barely midnight. But I don’t think that’s it. I think I’m waiting for Al Capone to strut through the joint with his entourage. Or maybe Jack Kerouac will slouch in, alone.

I was never as big a fan of On The Road as I wanted to be. Kerouac’s words fired me up, but the man was just too into himself and his booze for me to feel safe with him. Yet tonight, I’m feeling dangerous, and an echo of his desire stirs in me: in my case, the desire to beat the years back, and once again become one of “the mad ones.”

Not mad beyond recall, I guess. Tomorrow we don’t want to make too late a start to see daytime Chicago. So we leave the bar around midnight, when the party is just beginning. I’ve only tasted a sip: to savor, remember, and revisit. Oh, I’ll be back, because Chicago knows how to kick it after dark, and this moody room is a classy dame with a naughty streak, who will never go out of style.