I received a terrific writing prompt today from Liz Shaw over at The Writing Reader, a blog I recommend to other avid writers and readers. I felt excited enough about the results I was able to achieve within about 15 minutes, that I’ve decided to post my flash fiction response here. When I take the time to respond to writing prompts, I find that they’re great exercises for working my imagination muscle.

Here’s Liz’s Writing Prompt: Write a story, scene, or poem about two people in a relationship that has already died, but one doesn’t know it yet.

Here’s what I came up with: 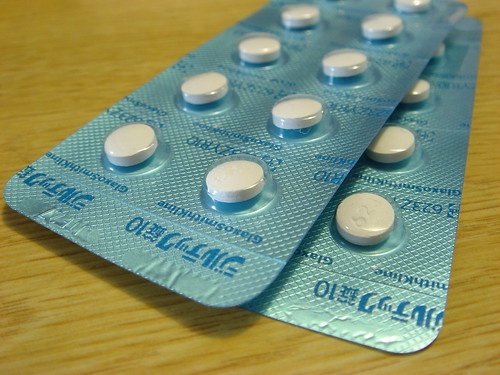 THE END OF ALLERGY SEASON
By Cara Lopez Lee

His reflection disappeared as he opened the mirrored medicine cabinet door. He reached for the familiar blister pack and pressed out two allergy pills, partly for the relief, but more because he craved that deep, almost anesthetic sleep. He didn’t believe in valium or other muscle relaxants, addictions for weaker men.

The problem was real. His nose was itchy, his eyes watery, and the pressure, dear God, the pressure behind that spot that Janine still called his third eye. If there was special sight or insight to be had in that chakra, he had lost it, had stopped believing in her new age wisdom.

As he crawled into bed next to her, he indulged in a low groan. She rolled away and said that people with cancer didn’t complain as much as he did about his allergies.

Janine used to say “bless you” every time he sneezed. On the third time she would always make the sign of the cross over his head and they would laugh. Now she rolled her eyes at every sniffle.

“That sounds disgusting. Get a tissue like a civilized person.”

“You don’t understand. When I blow, nothing happens.”

“You have an excuse for everything.”

He had no reply. She was right. It was already a year since he’d gone to lunch with his ex, Lori. “Nothing happened,” had been his excuse. It was true: nothing had happened. But everything had changed. The thought that he might have doubts had started hers. Or so it seemed.

He lay back, propped up on extra pillows, and tried not to sniffle. The pseudoephedrine began to kick in and he began to drift. She kicked him lightly. Maybe she was asleep and already dreaming without him, or maybe he’d sniffled again without knowing it.