Memoir of a Vietnam POW 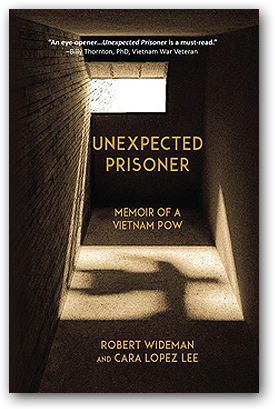 "An eye-opener. I had developed a totally different picture
of POW existence. Unexpected Prisoner is a must-read."
—Billy Thornton, PhD, Vietnam War Veteran

When Lieutenant Robert Wideman's plane crashed on a bombing run in the Vietnam War, he feared falling into enemy hands. Although he endured the kind of pain that makes people question humanity, physical torture was not his biggest problem. During six years as a prisoner of war, he saw the truth behind Jean-Paul Sartre's words: "Hell is other people." Unexpected Prisoner looks at how soldiers trapped in war often have the most troubling conflicts with those on the same side. Wideman's memoir explores a POW's struggle with enemies and comrades, Vietnamese interrogators and American commanders, his lost dreams and ultimately himself.

"This is a truly remarkable account of experiences from within the walls of captivity."
—Rick Fischer, Vietnam War Veteran, Army Pathfinder shot down in 1969

"Unless you were there, you will never truly understand what it was like to be fighting a war that had no description. As a Vietnam Veteran I can empathize with all who have served, but reading Robert's story has added a whole new dimension to this experience. I had to engage the enemy on occasion, but I never had to live with him. I can only imagine what it must have been like to be a POW in North Vietnam. Robert Wideman and his remarkable book do an incredible job of putting us there!"
—W.R. (Bill) Cobb, 1st Army Vietnam Veteran, Fortune 50 Executive, and Author

"I roomed with Bob at various times during those trying and difficult years as POWs in North Vietnam. I shared a number of the episodes he relates. His perceptive analyses and detailed descriptions vividly depict our interactions and emotions as human beings unwillingly thrown together into inescapable, trying situations and our individual and collective efforts to cope with and overcome these adverse conditions."
—Howard Hill , Retired U.S. Air Force Colonel

"A lot of great books have been written about the American experience that is called Vietnam. Robert Wideman's Unexpected Prisoner is a great book that tells the truth regardless of the consequences to a man who was shot down and held captive for six long years."
—Albert St. Clair, Navy Diver, Carrier Pilot and Veteran of Iraqi Freedom, Desert Shield, and Enduring Freedom

"Unless you were there, you will never truly understand what it was like being a POW in Vietnam. Robert Wideman and his remarkable book do an incredible job of putting you there!"
—Brad Hoopes, Author of Reflections of Our Gentle Warriors

"Robert Wideman and I share a common bond from our years in Vietnam. He was shot down and taken captive. I was overrun at Con Thien (a hill at the DMZ). His story of captivity is the most accurate version of the events that occurred in the North I have ever heard. Truly refreshing."
—Captain William (Willydog) Roberts, Retired U.S. Marine

"As a naval aviator who endured a very real ten-day survival training exercise, I can barely imagine six years as a POW! Thanks to Robert for sharing. This book is a must-read for those interested in understanding the risks our men and women in uniform with combat assignments and enemy exposure face every single day."
—Sam Solt, Former Naval Aviator

"As a member of US. Army Counterintelligence, part of my job was acting as the 'Aggressor' for escape and evasion training of Army personnel. Robert Wideman's book lays out in spades what we tried to prepare our soldiers to expect and endure if captured. This book should be a text for training in the future."
—Howard Lowell, former Army Counterintelligence Officer